Last year the FBI asked Sherlock Investigations to supply DNA evidence for Kenneth Christianson, whom we believe was "D.B. Cooper." We sent them envelopes and stamps that Christianson had licked. We also sent them a right thumbprint from his Army discharge papers where he was a paratrooper.
All this is probably in a box in the basement of the FBI headquarters in Seattle.
Today we learned from a credible source that the DNA the FBI has from a clip-on tie that they found on a seat in the 727 that Cooper hijacked is in a "severely decomposed state," probably from mishandling. The DNA is probably not good enough to stand up in court, and probably not good enough to match any DNA supplied to the FBI from possible suspects.
The only other DNA evidence that the FBI had was 8 cigarettes that Cooper smoked during the skyjacking. We understand that over the years the FBI lost them.
The FBI lifted about 66 fingerprints that couldn't be identified. We don't know whether or not one of them was a right thumbprint.
Until New York Magazine came out with the story of our suspect last fall, the FBI had all but buried D.B. Cooper. We caused them to reopen the case.
The recent discovery of a parachute in the area where Cooper jumped looked like an amazing new clue. The chute turned out to be silk, when the one operable one that Cooper used was nylon.
If Cooper lived, he must have told someone about his feat. But it was almost 37 years ago, and Kenneth Christianson is deceased, and anyone that he told may also be deceased.
Posted by Skipp Porteous at 3:27 PM 5 comments:

From time-to-time our readers help us with locate cases. Once again, I need your help.
We're looking for a Broadway actress who was quite attractive and renowned about 50 years ago. Her name is Rosemary Williamson. Sometimes she went by Rosemary Williams. She's about 80 now, if still with us.
Williamson, we believe that's her birth name, was from, we also believe, Ohio.
Williamson was the subject of a provocative TIME magazine article called "I Never Knew..." on March 19, 1951.
There is also a photo available from LOOK magazine in 1949. It shows Rosemary Williams putting on makeup. Stanley Kubrick was the photographer.
Rosemary Williamson was listed as a show girl in the 1949/1950 comedy/musical "As the Girls Go" in New York.
We don't know what other shows she was in, if any.
If any of our readers know the current whereabouts of Rosemary Williamson, we'd really like to hear from you. Email us at sherlockinvestigations@gmail.com
Posted by Skipp Porteous at 4:42 PM 1 comment:

Sherlock Investigations just obtained letters written by suspect Kenneth Christiansen, before the 1971 hijacking in which he describes himself physically, and offers a motive for the hijacking. The daring hijacking was carried out by a man identifying himself as D.B. Cooper. We believe that Christiansen could very well be D.B. Cooper.
Christiansen frequently flew to Hawaii and enjoyed sunbathing on Waikiki Beach. Indeed, in one letter he wrote, "Spent all afternoon in the sun, sure changed the color of my skin."
Yet, the FBI claims that Christiansen was "pale."
In other letters he reveals a possible motive for extorting $200,000 from Northwest Airlines. He writes of frequent strikes that caused him to get laid off. In one, he says that "the peanut butter jar is getting low," so he'd better get a job. He worked various odd jobs during the strikes.
When working at Northwest, Christiansen got $150 a week. Yet, a year after the hijacking he bought a small house in Bonney Lake, Washington with cash.
When Sherlock Investigations first identified Kenneth Christiansen as the most likely suspect for being D.B. Cooper, Ralph Himmelsbach, the retired FBI Special Agent who had worked on the case for years said that if he were still on the case he would investigate Christiansen.
When Florence Schaffner, the stewardess (then not yet called flight attendants) who Cooper handed the hijack note to, saw the photo of Christiansen, she said that he looked more like Cooper than any photos the FBI ever showed her. She, and Tina Mucklow, the other stewardess, thought Cooper was about 45.
Kenneth Christiansen, then 45, was 170 pounds, 5'10" in shoes, and was dark-complexioned through constant sun tanning. But Special Agent Robbie Burroughs in Seattle said, "He's not a viable suspect."
The FBI claims that Kenneth Christiansen was 5'8" and 150 pounds, and pale, when Cooper was described as 5'10" to 6' tall, up to 175 pounds, and dark-complexioned.
Also, the FBI asked, why would he hijack a plane from his own company? Somebody would recognize him, they said.
Well, Florence Schaffner, who worked for the same airline, in the same capacity as Christiansen, didn't recognize the photo of him. Neither did Bill Rataczak, the co-pilot in the hijacked Northwest plane.
Kenneth Christiansen, before working for Northwest as a steward, was mechanic for the airline. He knew the planes. Recently, Bill Rataczak said that Cooper "knew the airplane."
Kenneth Christiansen's drink of choice was bourbon, and he chain-smoked. During the hijacking, Cooper ordered bourbon, and chain-smoked. The cigarettes he smoked on Flight 305 would yield valuable DNA evidence, but the FBI lost them.
Sherlock Investigations has a copy of Christiansen's Army discharge papers, where he was listed as a paratrooper. Many skydivers have said that the jump could have easily been pulled off. In fact, a few years ago the jump was duplicated. Yet, the FBI still believes that Cooper died when he jumped. Still, no body or parachute was ever found.
Kenneth Christiansen lived until 1994 in his house in Bonney Lake, Washington.
Posted by Skipp Porteous at 1:59 PM No comments: 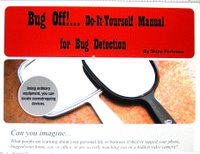 Requests for bug sweeps come into Sherlock Investigations from all over the country. Electronic eavesdropping detection is expensive, especially so if I have to travel outside of the New York metro area. The truth is, (and this is a trade secret) most bugs and wiretaps are found through a visual inspection.
The key is, knowing what to look for. Thus, the manual, Locating Wiretaps and Bugs...Without Any Special Equipment!, by Skipp Porteous. In the manual, I tell, and show, you exactly what to look for. It has about 36 full-color photos, and full descriptions on how to conduct a sweep of a home, small office, or vehicle.
I'm a well-known TSCM (Technical Surveillance Counter-Measures) expert. In my manual, I reveal some of my trade-craft that will give you all you need to know about locating bugs and wiretaps.
If you suspect your spouse has bugged your home, or your neighbor has tapped your phone line, I'll show you how to find the bug or wiretap. And you'll save hundreds of dollars!
For more information, click here.
Posted by Skipp Porteous at 3:59 PM No comments:

Surveillance On Couple of Chicks 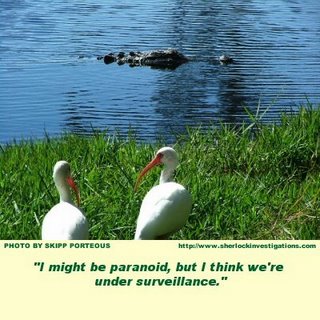 Posted by Skipp Porteous at 3:38 PM No comments:

Skipp Porteous, owner of New York City's Sherlock Investigations, has been a private eye for years. Now, he shares the top ten things he's learned over the years.
1. Question everything.
2. Assume that your phone is tapped.
3. Look both ways on one-way streets.
4. Look both ways when the light turns green.
5. Make use of your rear-view mirror.
6. Never think that you're above the law.
7. Trust is earned, not assumed.
8. TV private eyes are fictional.
9. Don't make problems for yourself when solving other's problems.
10. Keep a sense of humor.
Posted by Skipp Porteous at 10:32 AM 1 comment:

Some companies now ban laptops at meetings to battle against multitasking. Cell phones should also be banned, but to prevent spying, not multitasking.
Corporate spying is growing along with technology. Perhaps the most common "bug" today is the cell phone. Not a bug in the cell phone, but the cell phone itself. If given $10,000 in cash, a lot of employees would dial a number on their cell phone before going into a confidential meeting.
That's all a competitor would have to do to learn a company's secrets. The cell phone would pick up all the conversation in a meeting and transmit it to whoever is listening, and, perhaps, recording.
Before high-level meetings, Skipp Porteous, of Sherlock Investigations, often sweeps a conference room for electronic listening devices. "I can assure them that the room is clean," Porteous said, "until the people attending the meeting arrive." To prevent eavesdropping from cell phones, Porteous says that all staff members should leave their cell phones in their desks.
While most employees are trustworthy, "You never know for sure," Porteous said.
Posted by Skipp Porteous at 2:29 PM No comments:

Earl Cossey, who owned and packed the original parachutes that were supplied to the man known as D.B. Cooper on Thanksgiving eve in 1971, said that the chute recently given to the FBI was not one of the one's supplied to Cooper. "Not even close," Cossey said.
There's been inconsistency about the parachutes given to Cooper. The FBI said recently that Cooper's parachute was white, while other reports long ago said that the parachute was yellow and red. In his book on D.B. Cooper, Max Gunther said that "Clara" knew that the parachute Cooper used was red and yellow, when this fact hadn't been released to the media.
The discovery of the parachute in a field in Clark County, Washington by a contractor building a road revealed another inconsistency. The FBI believes that Cooper didn't even open the parachute when he jumped, plunging him to his death. This is pure speculation on the FBI's part. Even he was able to open the chute, the FBI says that he would have died anyway, due to the rough terrain in which he would have landed.
When I first learned about the parachute that was found in a field near Amboy, Washington, I google-earthed the location. Clark County, to my surprise, is largely fields, not forest. The chute was found right where they think Cooper jumped. I still maintain that Cooper survived the jump, as no body or parachute was ever found.
Posted by Skipp Porteous at 10:59 AM No comments: